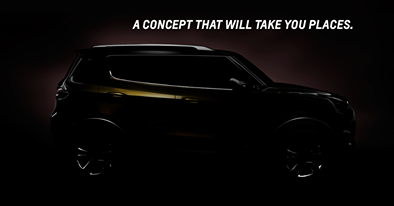 General Motors India will showcase a new concept SUV christened as “Adra” at the 2014 Auto Expo. The American car maker will also launch the Beat facelift and display the Trailblazer SUV.

Just before the Auto Expo kicks off, Chevrolet has released a teaser image of the Adra concept SUV. The Adra concept is a sub-four metre SUV similar to the Ford EcoSport and has been designed at eneral Motors’ Technical Center at Bangalore.

More details will be revealed at the press conference during the Auto Expo. The Adra concept SUV will mostly likely go into production and could also be the saviour model for Chevrolet India like the EcoSport. Chevrolet which launched three new products in 2013 could not gain traction particularly on the Sail & Sail hatch which are selling on average 400-500 units per month. The Enjoy MPV is doing decent sales and diesel variant is quite popular in the commercial segment.

Chevrolet India has been in losses for many years need some blockbuster products in the Indian market to regain customer confidence. Chevrolet will also showcase the new Corvette and Camaro muscle cars alongside the regular range available in India.

Chevrolet to launch new Beat and Beat Activ crossover in 2017 General Motors India has been struggling to get a hold of the Indian market for a while now. Their offerings have not been able […]

2014 Auto Expo was one of the best managed expo in the Indian history. The overall experience was made even better thanks to the mobile app which kept the users updated with all the events, […]

Maruti Suzuki will launch the all new Celerio (codenamed YL7) at the 2014 Auto Expo and the car has been caught undisguised at the Buddh International Circuit. The Celerio in ZXi trim was spotted and […]