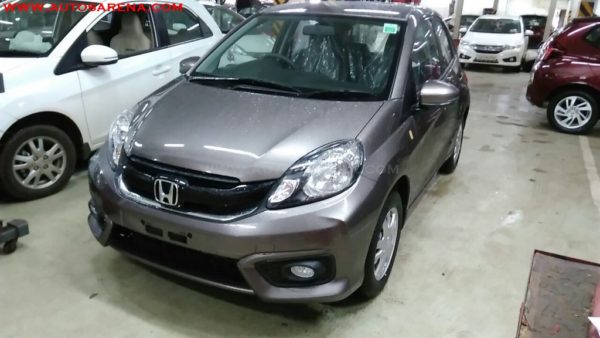 Honda Brio facelift has reached all dealers in India and the launch could be announced very soon. The Brio facelift will carry few cosmetic changes on the outside and major updates to the interiors.

The Brio facelift comes with a new front grille with black treatment unlike the chrome found on the Amaze and gives the car a sporty appeal. The car also gets a new front bumper, a new larger radiator grille and new headlamps. The side profile gets no updates while the rear is identical to the current model.

The new dashboard from Amaze with an all-black theme complements the car and looks sporty. The car also gets faux silver and piano black embellishments. . The instrument console is new but misses on the large MID with fuel meter offered on the sedan version.

The Brio will continue to be available with a 1.2 petrol i-VTEC (intelligent Variable Valve Timing and Electronic Lift Control) engine with Electronic Lift Control which delivers high power output at an impressive fuel economy. The Brio has a max output of 65[88PS] @ 6000 and max torque of 109 Nm @ 4500 rpm.

The 2016 Brio facelift will get a CVT transmission similar to the Amaze.