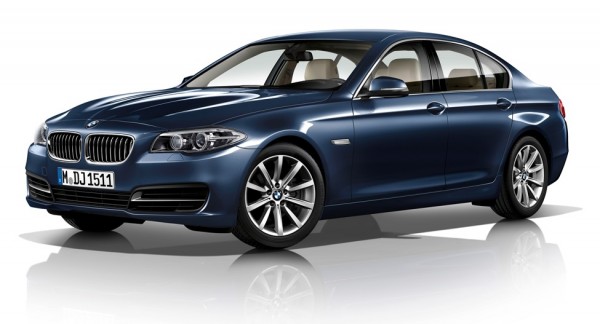 With Mercedes-Benz launching the facelifted E-Class in July followed by Audi which introduced the updated A6 with a new petrol engine option, BMW spared no time to get the 5 Series to the Indian shores. The sedan gets minor updates on the outside and inside including a new technology and engine options.

The 2014 5 Series comes with sharper sporty edges, additional contour lines for the BMW kidney grille surround and the restructured lower air intake. Other features include:

Under the hood the 5 Series gets Euro 6 complaint engines which will be detuned to meet the Indian fuel quality levels. BMW will continue to offer the 520i petrol and the 520d, 525d and 530d diesel models. The top of the line 535i could be offered on order only. Chances of the base 518d to make in India looks very slim. The same engine is also offered on the recently launched 1 series.

BMW may also launch the performance version of the 5 Series M5 along with the new 5 Series in India. Prices could be revised on the upper side but BMW may play safe and keep the prices competitive.

Internationally the 5 Series comes with four versions – sedan, Touring, Gran Turismo and ActiveHybrid 5. In India only the sedan & Gran Turismo are on sale.

BMW previewed the new X6 M Sports Activity Vehicle at the BMW M festival in Goa. This is for the first time in Indian both the X5 M and X6 M has been showcased before […]

BMW India celebrated the 11th anniversary of its Chennai plant with the launch of SKILL NEXT initiative at the hands of legendary cricketer Sachin Tendulkar and engineering students of Anna University. It was an experience […]