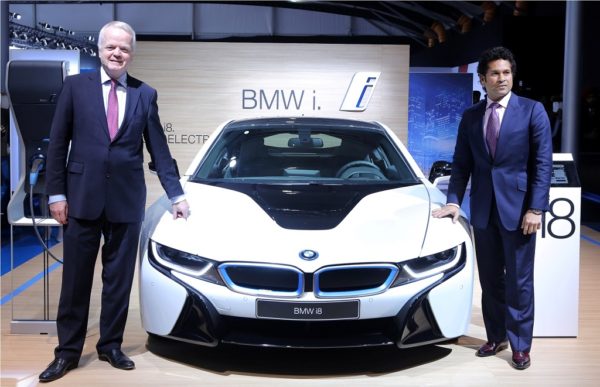 BMW @ Auto Expo, the company showcases it might at the Auto Expo 2014.

BMW India presented the new generation of Individual Mobility by unveiling the i8, the all-new X5 and the all-new M6 Gran Coupé at the 12th Auto Expo 2014. The BMW i8 will be launched in India as a CBU (Completely Built-up) unit by end of 2014.

The intelligent plug-in hybrid system in the BMW i8 combines the benefits of an electric motor and a petrol engine into an extraordinary driving experience: highest efficiency and maximum dynamics are simultaneously possible. With BMW eDrive, the new BMW drive technology, the battery can be charged from any mains socket or while driving.

The all-new BMW 3 Series Gran Turismo was also launched in India during the Auto Expo.

Locally produced at the BMW Plant Chennai, the all-new BMW 3 Series Gran Turismo will be available at BMW dealerships across the country from March 2014.

Adding a unique and distinctive model variant to BMW’s product line-up, it blends the BMW 3 Series Sedan’s dynamic, sporting genes with the practicality and versatility of the Touring.

Breathers behind the front wheel arches, which reduce turbulence in this area and lower the car’s aerodynamic drag.

The all-new BMW 3 Series Gran Turismo will be available in a diesel variant (the BMW 320d Gran Turismo) at an all India ex-showroom price of INR 42,75,000.

The 2.0 litre BMW TwinPower Turbo four-cylinder diesel engine combines advanced CommonRail direct injection with innovative turbocharger technology to develop an output of 135 kW/184 hp and an impressive torque of 380 Nm. The sprint from 0 to 100 km/hr takes 7.9 seconds and top speed is 226 km/h.

The all-new BMW X5 will be locally produced at BMW Plant Chennai from third quarter of 2014.

The all-new BMW X5 comes as standard with BMW xDrive – an intelligent all-wheel drive system that monitors the driving situation constantly and distributes drive power smoothly between the axles. BMW xDrive splits drive variably to the front and rear axles to suit the driving situation and the surface. In addition, the Dynamic Performance Control optimises tracking stability under tough driving situations, especially when accelerating out of a sharp bend.

The all-new BMW M6 Gran Coupé will be launched as a CBU (Completely Built-up) unit by mid 2014.

BMW India has also displayed the Z4 (Z4 sDrive35i) and the 7 Series (760Li Individual) which can be ordered as CBUs.

BMW i8 snapped before preview at auto expo

BMW preview one of the most exciting car launched in 2013, the all new i8 sports car. The BMW i8, was first introduced as an Concept Vision Efficient Dynamics and the production model with a […]

BMW Group India has announced that it will participate in Auto Expo 2018 at Hall No. 15, India Expo Mart at Greater Noida. BMW India, a subsidiary of the German multinational automotive manufacturing company was founded […]