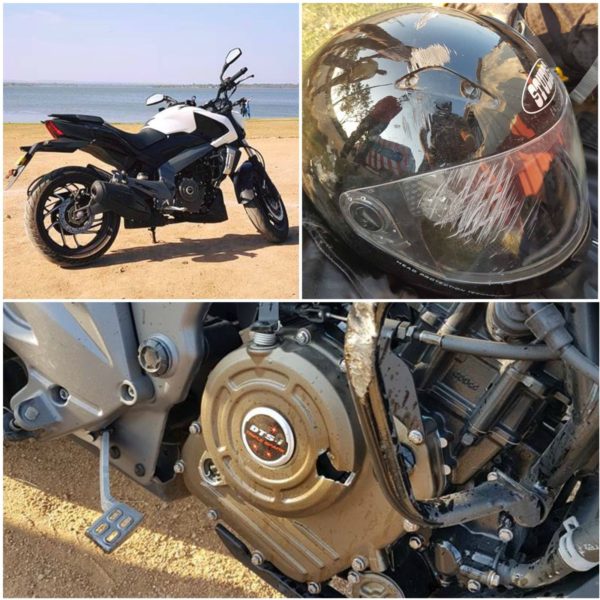 This is not some good news, but it is worth a mention. The recently launched Bajaj Dominar 400 is currently the most trending bike, be its looks, prices or features. Bajaj has ticked all the boxes correctly.

Well it was a bad day for rider Omer Bin Abdullah Al-Balhaq, who met with an accident on Bangalore-Hyderabad highway on February 4, 2017. The rider had an unfortunate crash because of an lady who suddenly appeared while crossing the road.

Lucky Mr. Omer Bin Abdullah was lucky as he escaped with minor bruisers, but not his new love – the Bajaj Dominar 400. 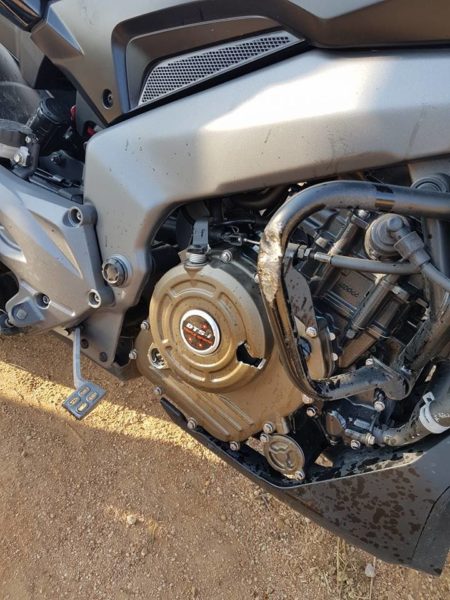 But the new motorcycle suffered a significant damage with parts such as the grab rails, exhaust, crash guard were heavily scraped. To make it worse the engine casing was left with a hole on the right side. Lucky the headlamp did not get damaged else it could be another big repair cost.

This also puts a doubt on the engine casing supplied by Bajaj on the Dominar which should have not got damaged in such manner. We hope the company is looking into this matter.

The Bajaj Dominar 400 is powered by a 373.3 cc single cylinder, triple spark, 4 valve DTS-i engine mated to a 6 speed gearbox.

The Dominar 400 is the first bike to be offered with full LED mosaic headlamps with balanced white light and vertical AHO (Auto Headlamps On).

The most awaited motorcycle Bajaj Dominar launches on 15th December. New spy images of the Bajaj Dominar 400 have been published on Facebook a day before the launch giving us one details of the soon […]

Bajaj Dominar 400 launched at Rs. 1.36 lakhs, all details inside