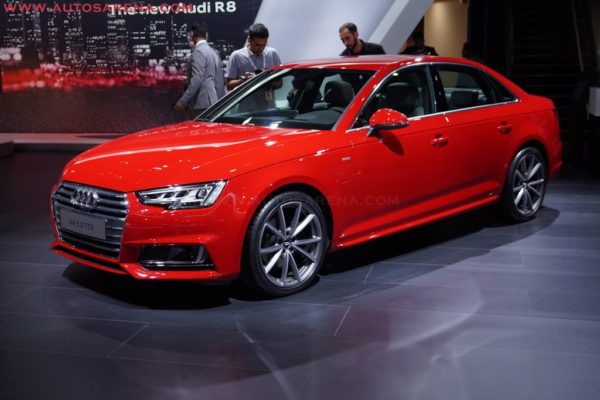 New A4 to be available in petrol & diesel engine options.

German luxury car maker is all set to launch the new Audi A4 sedan in the Indian market this September.

The interior is tech loaded and the Indian model could get Audi’s virtual cockpit with high resolution 12.3-inch LCD screen that displays the most important information in brilliant high-resolution graphics, with great detail and sophisticated effects.

The new dash is clean and uncluttered with a new three spoke  steering wheel which adds a sporty touch. The TT inspired virtual cockpit for the instrument cluster looks classy and sporty. Audi will also offer the new A4 with an improved Multimedia interface (MMI) with 8.3 inch touchscreen display.

Music to your ears will be provided by Bang and Olufsen sound system with 3D sound. The A4 also gets Audi phone box with wireless charging and a heads up display.

Powering the sedan is a new 30 TFSI 1.4 litre turbocharged Petrol engine will put out 150 PS and 250 Nm of torque with 7 speed S–Tronic automatic transmission.

Audi has launched the most powerful car in the Indian market, the RS7 Sportback at a starting price of Rs. 12,856,000 (1.28 crores). The RS7 combines the power of a sportscar with elegance of a […]