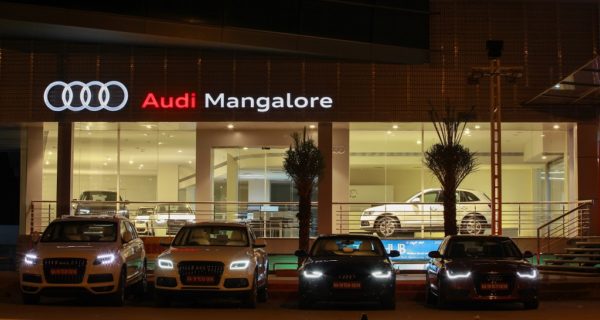 Audi, the German luxury car manufacturer, inaugurated its 30th world-class showroom in India and its 2nd in the state of Karnataka in Mangalore after Audi Bengaluru.

The entire Audi model range in India will be available at Audi Mangalore.

Located in a landmark building of Mangalore called The MAK Mall, Audi Mangalore is spread over a total area of 5500 sq. ft. With the signature Audi honeycomb aluminum facade on the exterior, and a display area that can accommodate 8 cars, Audi Mangalore will display the entire range of Audi cars available in India.

Audi Mangalore will also house an Audi Shop where customers can purchase a variety of Audi branded merchandise.

Audi Mangalore will also manage the exclusive Audi service facility, located on Kuloor Junction, NH -17, Mangalore in Karnataka. This facility is spread over an area of 13,200 sq ft. and has a capacity to service 12 cars per day in a single shift on a total of 6 bays. The technicians at the facility are trained to ensure world-class services to the customers.

Audi India plans to expand its network to 34 dealerships by the end of 2013 from its existing 30 centers.

Audi commences production of the Q3 SUV in India

Audi India has started the production of the Q3 compact-class SUV at its Aurangabad plant. This is the fifth model from the German luxury car maker to be assembled in the Indian market. The Q3 […]