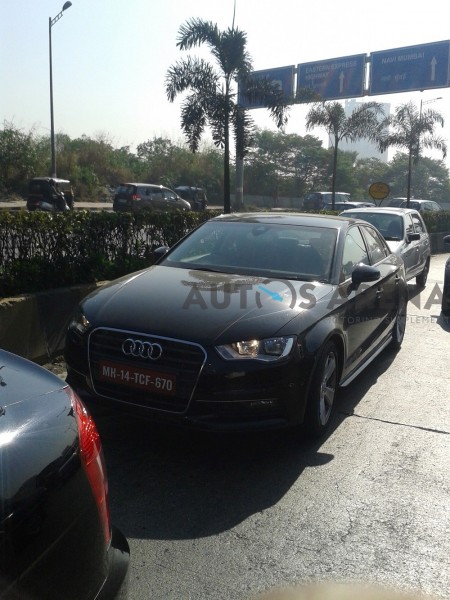 Audi A3 sedan has been spotted once again on the Mumbai roads just before the official unveiling of the car at the 2014 Auto Expo. The car just zoomed besides on the highway and we snapped the car in Powai, thanks to the traffic which is a very common scene on the Mumbai roads.

The A3 sedan premiered at the 2013 Shanghai Auto Show is based on the MQB platform and will be positioned below the A4 sedan. Audi ranked number one in 2013 crossing the 10,000 mark and the A3 will be further help Audi to boost sales and to continue its dominance in the Indian market.

The A3 will be offered in a choice of 1.8L TFSI petrol and 2.0L TDI diesel engines equipped with Start-stop system and energy recuperation.

The car looks a lot like the A4 when seen from a distant and once seen from a closer distance you release it is not the regular A4. In terms of size, one can compare the car to the Toyota Corolla and measures 4456mm in length. The seats may be slightly Indianised to offer better leg room at the rear.

The A3 sedan will compete with the likes of Mercedes-Benz CLA sedan which is also going to make it debut in the Indian market at the Auto Expo.

Renault will launch the facelifted Fluence in the Indian market soon. The car was spotted at the Renault-Nissan factory at Oragadam in Chennai and we now have more images of the Fluence with minimal camouflage […]

Audi recently unveiled the all new Q7 internationally. India being an important market, Audi has begun testing the new Q7. The new Q7 was caught testing with full camouflage in Mumbai. The new Q7 could […]

Audi India continues its winning streak World Car of the Year – Audi A3 Sedan is the big winner with coveted accolades from prestigious media houses such as Autocar India, NDTV, Car India and BBC […]