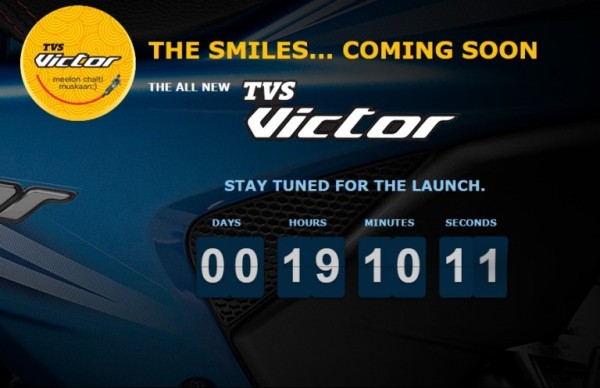 TVS Motor Company will launch the new TVS Victor in the Indian market today. The company has launched the official website for the TVS Victor (tvsvictor.com) and teased the model on the site.

First launched in 2001, the TVS Victor was the first motorcycle to be developed by TVS itself. The Victor was a massive hit and sold in good numbers much due to its values which include a Fuel efficient engines, strong performance and value for money.

TVS later discontinued the Victor due to new fresh competition and low sales but plans to bring back the iconic Victor in a brand new avatar tomorrow.

A teaser released by TVS on the web which reveals the bike logo, contrast stitching on the seat and red shade springs over the shock absorbers.

The new Victor will get modern styling along with a new 109.7 cc single cylinder air cooled engine which produces 8.3 bhp and 8.7 nm of torque mated to a 4 speed gearbox, this engine  is also shared with the Star City+.

With the new Victor, TVS is hoping to garner a higher market share which currently stands at 17 percent in the 100-110 cc motorcycle segment.