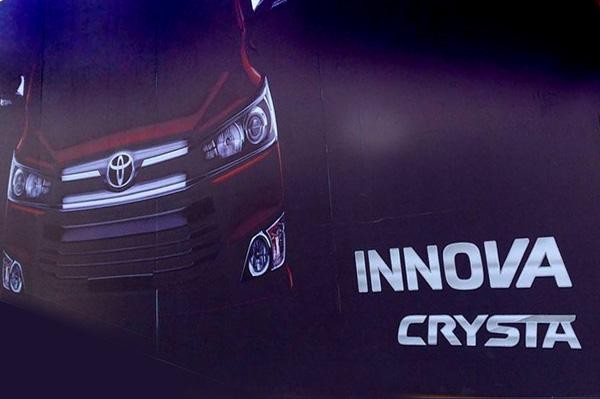 Toyota Kisloskar motor has released a teaser of the upcoming Premium new Innova on the web. The teaser reveals that the New Innova will be badged as Innova Crysta which is set to be revealed at the up – coming Delhi Auto Expo.

The new generation Innova design still retains the basic MPV shape but will feature a completely new look with new double barrel projector headlamps flanked by the large hexagonal front grille, reworked glass area with a  kink in the glass area sharply towards after rear door.

The interior has seen one of the most significant upgrades with new dual tone dashboard trim with faux aluminium, new 7.0 inch touchscreen infotainment system standard on all variants accept for the top end variant which will get a larger 8.0 inch touchscreen which will support HDMI and In car wifi connectivity.

Power for the New Innova comes from brand new GD series family of engines which replace the older KD series of engines internationally.  A brand new 147 bhp 2.4 litre diesel engine mated to a 5speed manual or 6 speed automatic transmission options for both engines. Toyota is also planning a new petrol engine for the new model.

More details to be revealed on the 3rd of February.

Mahindra & Mahindra have been the leader in the SUV segment and the brand has seen models like the Bolero, Scorpio and the XUV 500 taste sweet success in the Indian market. Mahindra recently introduces […]

Ignis to be Maruti’s trump card against the Mahindra KUV 100 and Renault Kwid 1000cc Maruti Suzuki will debut the Ignis compact crossover at the Delhi Auto Expo next month. The Ignis is the production […]