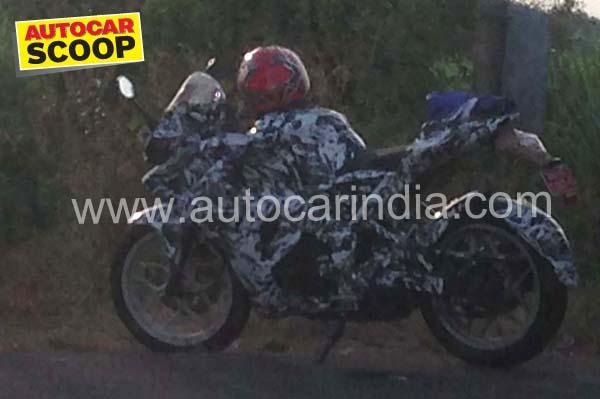 Bajaj will soon launch the faired version of the Pulsar 200. The bike is essentially the 200 NS with a full fairing. The Pulsar 200 SS (Super Sport) which think is how it is most likely to be called has been caught testing on the NH4 near Kolhapur and seems like will hit the markets very soon.

The official word is yet not out, but we can expect Bajaj to give us a big Diwali gift in the form of the Pulsar 200 SS. The bike will sport racy styling, with clip-on handle bar, new instrument panel, and all the features carried over from the Pulsar 200 NS.

The bike will be equipped with the 200cc engine which churns our 23.5 PS and 18.3 Nm of torque. The engine will be mated to a six speed gear box. In terms of riding position, the bike offers a lower stance as compared to the upright position of the Pulsar 200 NS. Styling seems to be similar to the Honda CBR 250 R when viewd from certain angles.

This indeed is a much awaited model and will give the Yamaha YZF-R15 and CHR 150R some run for its money. Hero has just unveiled their new 2014 Karizma R and Karizma ZMR and seems like Bajaj will certainly have an edge over them.

Bajaj has introduced Demon Black edition of the Pulsar RS 200 in the Indian market. The Pulsar RS 200, since its launch in March 2015 has claimed leadership in the super-sports motorcycle segment. The company […]