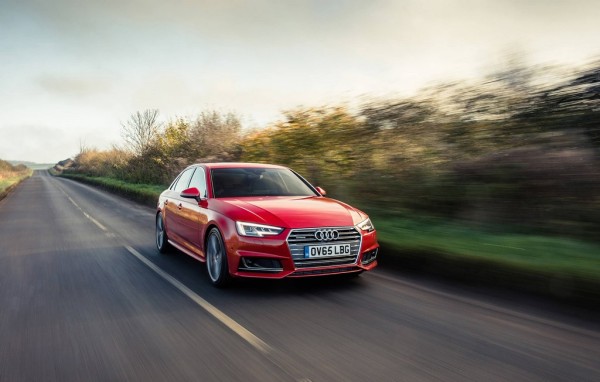 Audi’s all new A4 has been spied testing with minimal camouflage on Mumbai roads which means that the A4 is closer for launch in the Indian market.

Audi will introduce the all new A4 in India next year which comes with Audi’s new crisp and sharp design language. The New A4 will also be bigger and lighter than the current car which it replaces.

The New Audi A4 design is completely revamped which comes with new wider front grille, new bumpers with square shaped fog lamps and matrix LED headlights. The New Audi A4 also boasts of best in class drag co – efficient of 0.23 cd. The interior is tech loaded and the Indian model could get Audi’s virtual cockpit with high resolution 12.3-inch LCD screen that displays the most important information in brilliant high-resolution graphics, with great detail and sophisticated effects. Audi will also offer the new A4 with an improved Multimedia interface (MMI) with 8.3 inch touchscreen display.

Music to your ears will be provided by Bang and Olufsen sound system with 3D sound. The A4 also gets Audi phone box with wireless charging and a heads up display.

International engine line up on the New A4 includes a four cylinder 1.4 Litre TFSI with 150 Ps and the 2.0 litre TFSI petrol motor does 190 Ps. The 3.0 litre TDI diesel Quattro engine offers 218 Ps while the range topping six cylinder TDI Quattro develops 272 Ps. The engines are mated to a choice of six-speed manual transmission, the seven-speed S tronic) and the eight-speed tiptronic.

The Indian spec Audi A4 will be powered by 2.0 TFSi turbo petrol and a 2.0 TDI diesel engines. The 3.0 TDI may also be on offer.

There has been no word yet as to whether Audi will display the new A4 at the 2016 Auto Expo.

Click here to read more about the Audi Q3 Dynamic

Audi drives into Ranchi – opens its first-ever showroom in Jharkhand

“Audi is the undisputed No.1 luxury car brand in India. We look forward to command a leadership position in the state of Jharkhand as well and Audi Ranchi will accelerate our expansion into eastern part […]