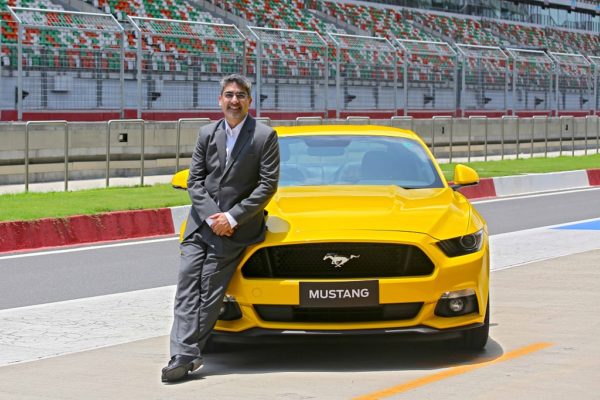 Ford Mustang available in Mumbai and Delhi only to start with.

Priced at Rs. 65 Lakhs, bookings for the iconic Mustang commence in Delhi & Mumbai in the first phase. The car was shown at the 2016 Auto Expo and was one most talked car (it has to be).

The car will be sold as a CBU and is built at the Flat Rock Assembly Plant in the United States.

Mustang in India gets the biggest block 5.0-litre V8 engine, featuring an upgraded valvetrain and cylinder heads, delivering a peak power of 401 PS with 515 Nm of torque with a top speed of 250km/h.

In terms of technology the car features Smart Keyless Entry with Push Button Start to SYNC2 and MyKey, plus standard Track Apps.

In terms of safety the car is equipped with Eight airbags. Along with the glovebox knee airbag for front passenger, the new Mustang have driver and passenger front and seat-mounted side airbags, two side curtain airbags as well as a driver knee airbag.

Ford Mustang is the world’s bestselling sports coupe*; Customer demand for iconic pony car continues to rise globally. Since the Mustang first went on sale in 1964, Ford has sold more than 9 million vehicles. It has made thousands of appearances in film, television, music and video games and is the world’s most-liked vehicle on Facebook.

In its first year of global availability including in RHD markets, Ford Mustang became the world’s best-selling sports coupe. According to registration data from IHS Automotive, Ford sold around 110,000 Mustang Coupes globally in 2015 – topping all other competitors.

Ford India is testing the Figo Cross in the Indian market. It was rumored the American automaker was working on a Cross variant. The heavily camouflaged test mule caught testing on the India roads assures […]

Ford is all set to launch the new Endeavour SUV in the Indian market. The company had revealed limited details couple of months ago and have now updated the site with all details and images. […]