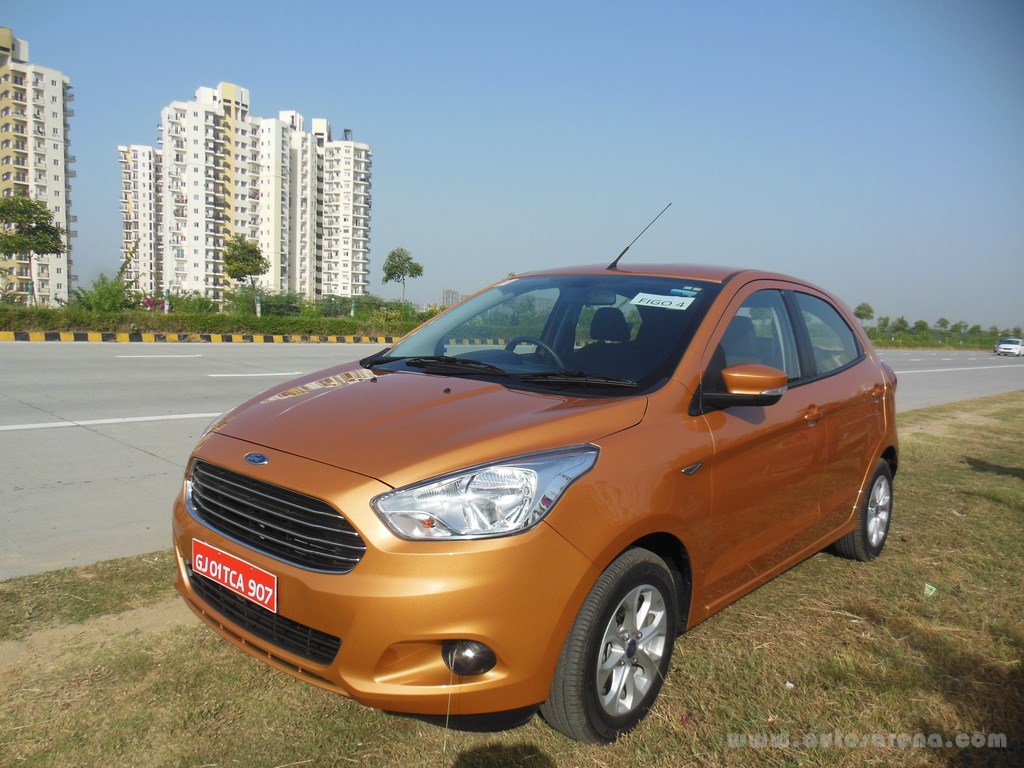 At the launch of the all new Figo, we were left wondering if the super-hit jingle ‘Achhe din aanewale hai’ was initially penned down for Ford India. That’s because, first it was Ecoport that created a flutter in the compact SUV segment and now the Figo siblings are bound to give sleepless nights to its competitors. Further on, the new Endeavour is expected to shake-up the premium SUV market when it hits Indian roads by end of this year. In short, we can comfortably presume that the tide is now turning in Ford’s favour. 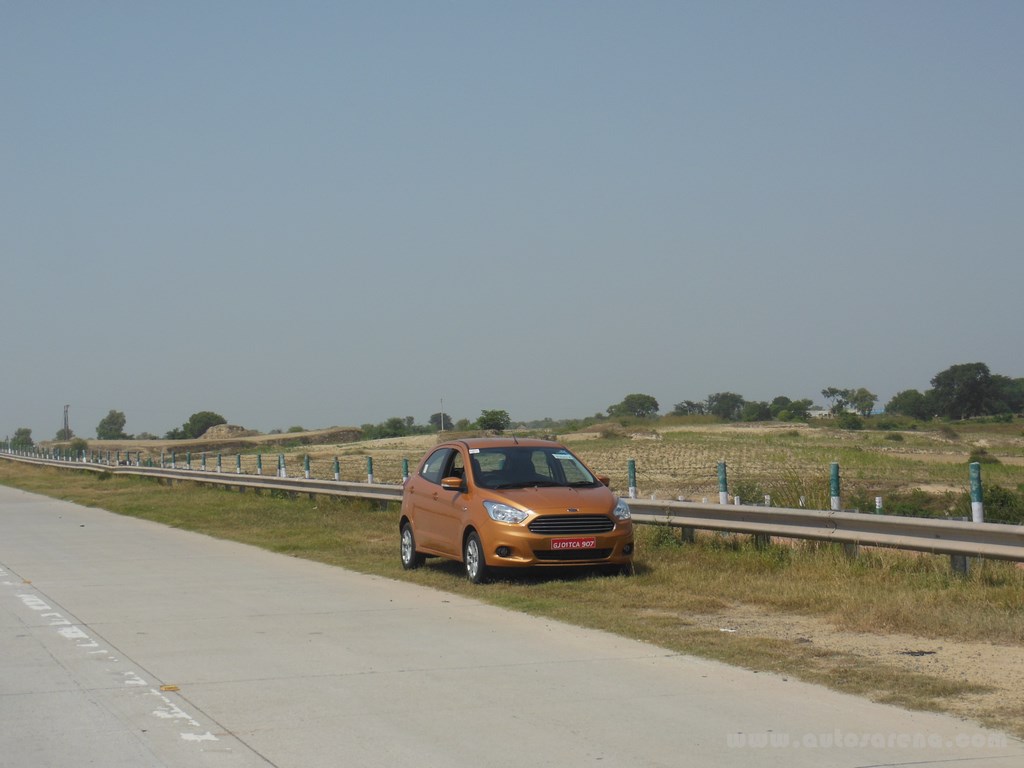 Immediately after the launch, Ford invited us for the ‘First Drive’ of the all new Figo from New Delhi to Agra and we simply couldn’t resist the temptation of driving this stylish hatch on the much famed Yamuna Expressway over the weekend. So we packed our bags and left for Delhi where the Ford team had all plans in place for us. The day began early with a quick briefing of the route to be taken, safety instructions and logistics. We drove from Delhi to Agra and back thereby getting a fair opportunity to drive the car in Delhi’s traffic, on Yamuna Expressway and then into Agra’s narrow and crowded lanes. 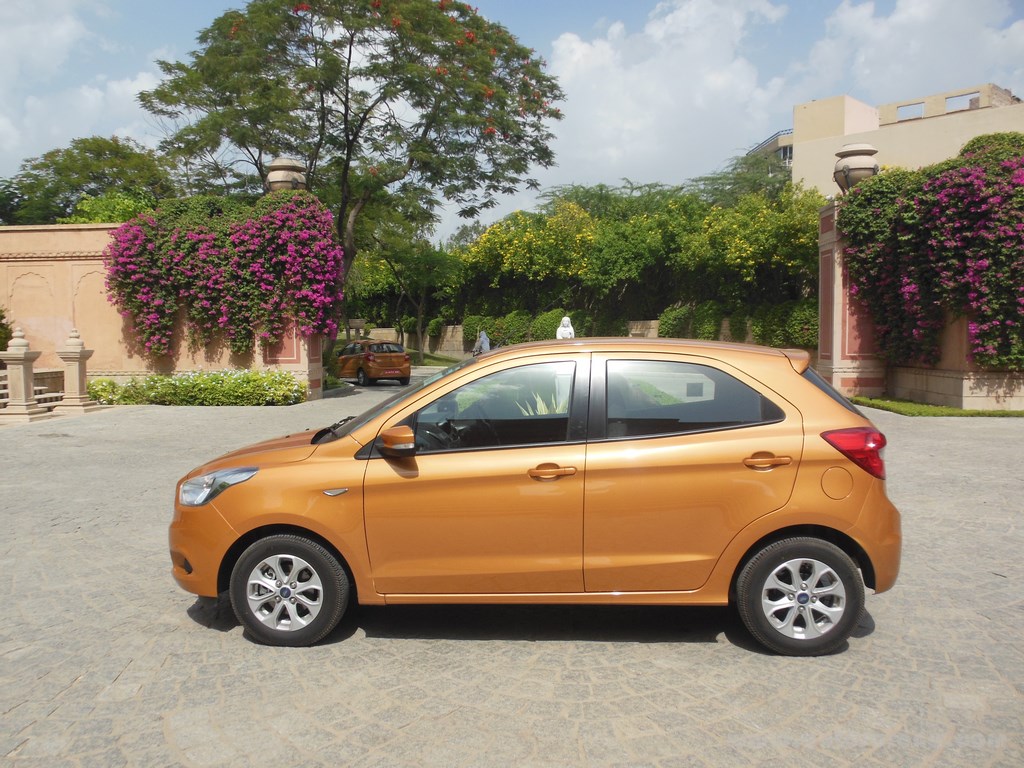 The 2015 Figo hatch is a car that many will fall in love at first sight. The Aston Martin inspired front, the relatively uncluttered side profile and a stubby but pleasing rear make it one of the best looking cars among its peers. You simply cannot find any fault with its exterior design and it comes across as an extremely proportionate and youthful car.

As you open the doors, you will realise that you are in familiar territory. The Figo shares the cabin design with its elder sibling the Aspire, albeit with an all-black interior theme which will be loved by the younger generation. 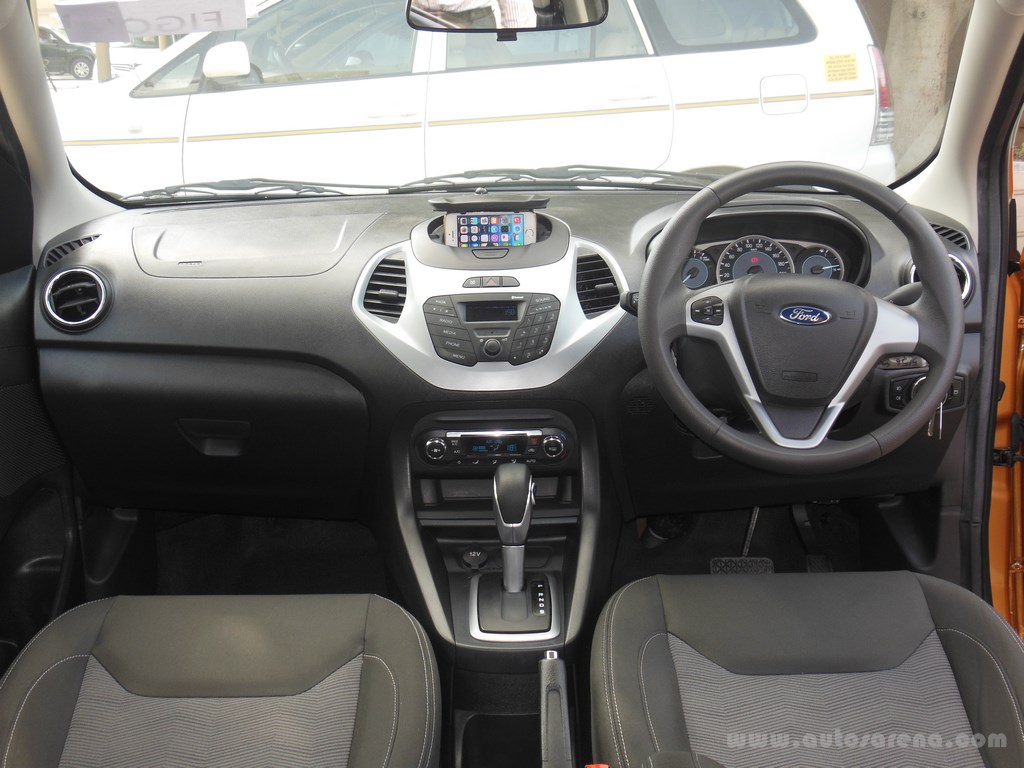 The driver’s seat gets height adjustment and is a comfortable place to be in with all controls within easy reach. The front seats offer good under-thigh support and the foot wells are deep and broad enough to let you stretch out comfortably. The electrically adjustable OVRMs offer a good view of the rear.

The steering wheel is nice and chunky and feels good to grip. The large horn pad placed in the centre is easy to reach and operate. Ford has swapped the lighting stalk to the right and wiper stalk to the left, a move which all Indian drivers will be pleased with. The speedometer and RPM dials are plain looking which seem a bit dated but are easily readable.

The centre console is typical Ford-like, a wing shaped unit with a plethora of buttons for the Audio system, Bluetooth, Phone connectivity, etc. The top variants Titanium and Titanium+ are equipped with SYNC infotainment system while the others get the Ford MyDock. The Music system too is at par with the best in that segment. 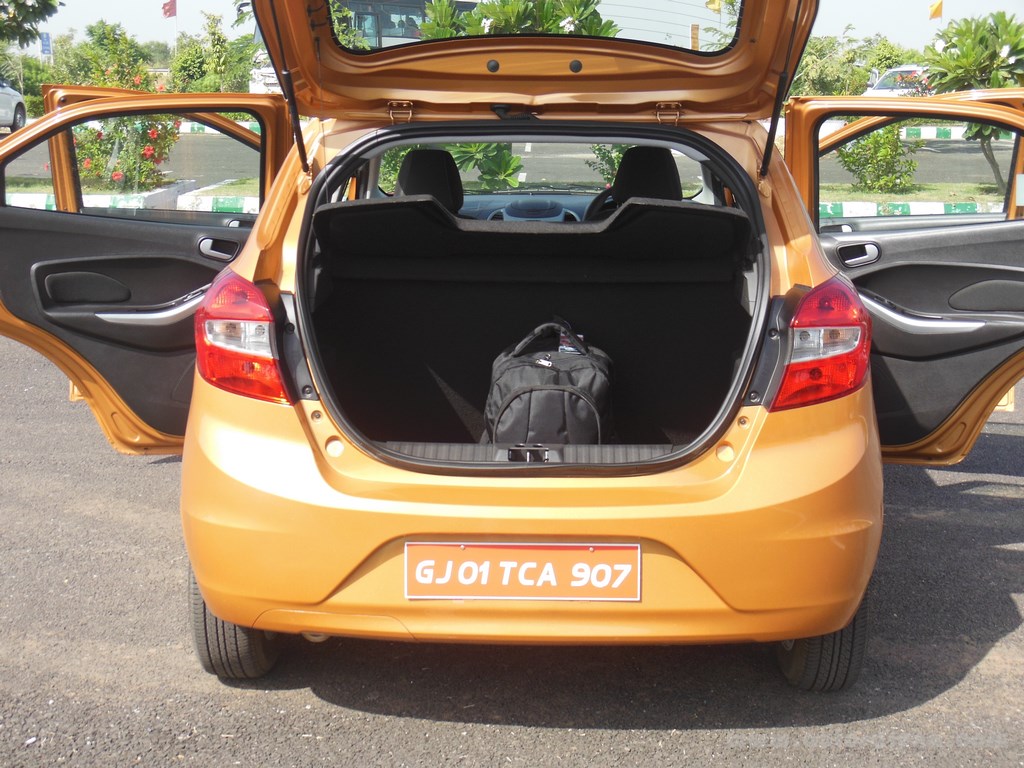 When it comes to storage spaces, the Figo gets a relatively large 257 litre boot,  parcel shelf at the rear, a standard size glove box and adequate storage spaces marked for bottles, mobile phones, sunglasses, coins and documents.

There are back seat pockets on the front seats for magazines and newspapers. The front doors get 2 bottle holders each along with large sized door pockets that may come handy to slide in your foldable umbrellas too!  The rear passengers don’t get bottle holders in the door pads but there is a provision to hold three additional bottles between the front seats.

The best-in-class wheelbase of 2491mm translates into a roomier cabin offering generous legroom and headroom for passengers in both rows. The car is wide enough to seat 3 adults in the rear on short drives but the transmission hump eats up into the floor space. On long drives, it is best to seat 2 adults and a child in the back seat. The recline angle of the rear seat is perfect and the adjustable head rests add to the overall comfort on those long highway trips. The overall cabin quality is above average but not class leading. 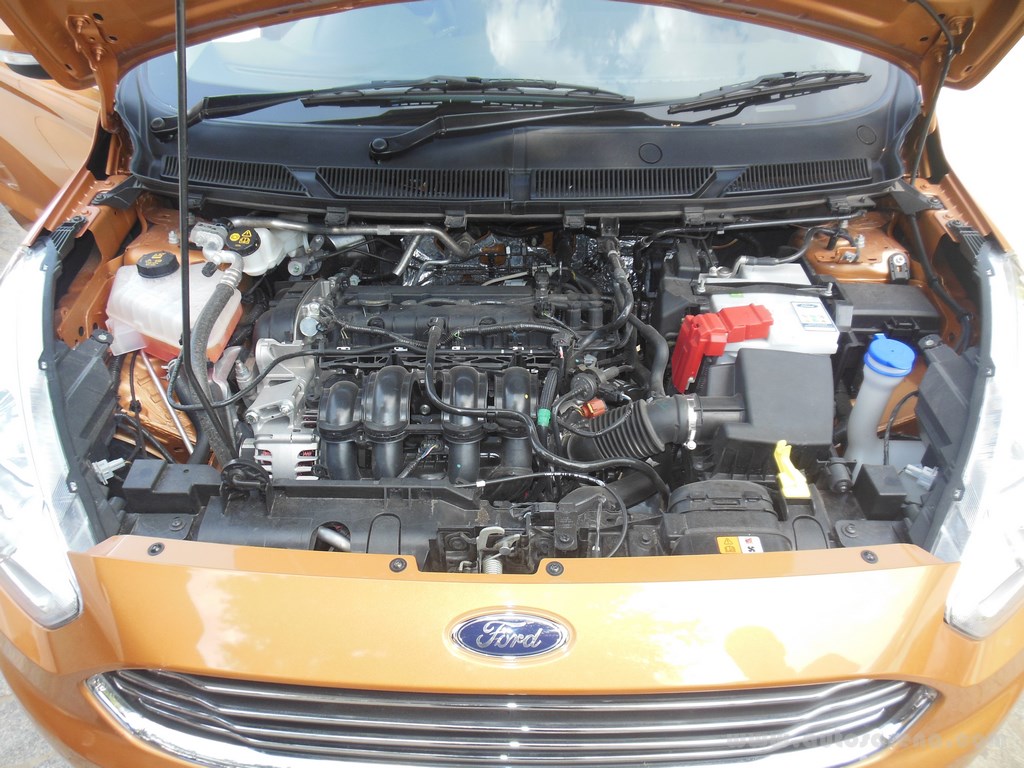 The Figo is being offered with 3 engine options.

While we drove the Petrol Automatic and the TDCi Diesel, it was the latter that was a supreme joy to drive.

The punchy diesel engine offers more than adequate power on tap across the entire powerband. The moment you cranked up the engine and shift into first gear, you are bound to appreciate the feather light clutch and slick gear shift.

Driveability is again typical Ford-like with the car quick to respond to any kind of inputs from the driver. Be it flat-out acceleration or hard-braking to bring the car to a dead stop; the car obeys all commands without any nervousness or hesitation. As said earlier, the clutch is light, gear shifts are smooth and braking is good, but we found the steering to be a little vague at times. The suspension set-up is excellent with the car remaining completely stable on bad patches and uneven surfaces especially at high speeds. The steering is light at slow speeds and it was a breeze to manoeuvre the car on Agra’s crowded streets.

As per ARAI certified figures the 1.5 TDCi Diesel Engine offers a fuel economy of 25.83 kms per litre but when we drove, the digital fuel monitor showed up an average fuel economy of 21 kms per litre which we feel is pretty decent considering that the air-conditioner was always on and we weren’t driving with any intent of extracting maximum fuel economy from the engine.

Air-conditioning is another plus point in the Figo. It is quick to chill and extremely powerful. The cabin was cool at all times in Delhi-Agra’s scorching heat and since there were no passengers in the rear seat, the blower speed was kept at minimum throughout. After having a first hand experience of the cooling inside the cabin we feel that the Figo can easily do without rear air-conditioning vents which are being offered by some of its competitors. 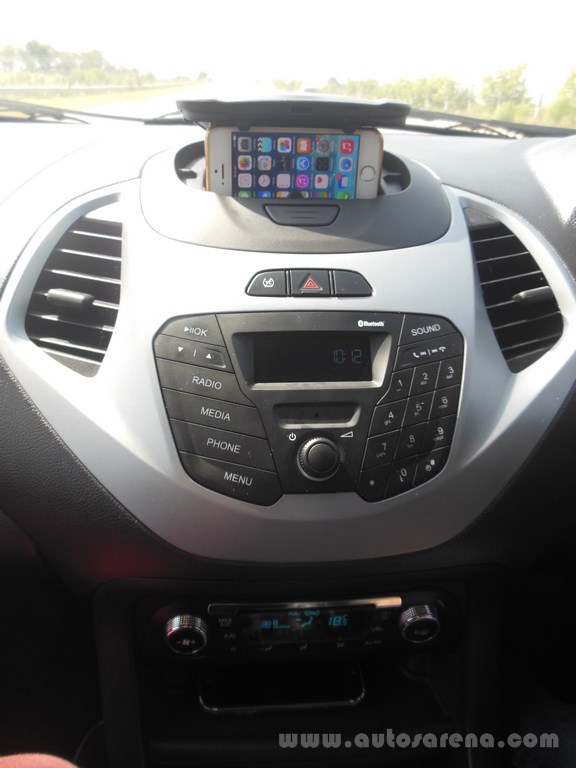 Earlier on, the Ecosport was launched with game changing gadgetries and Ford has continued that trend in all its subsequent models. The Figo comes loaded with smart features like MyFord dock, SYNC with Ford AppLink and an Emergency phone call system which is activated in the event of a collision. But what many owners, especially parents of young drivers will appreciate is the Ford MyKey technology which allows owners/parents to program the car to limit its top speed, regulate audio volume and ensure that the seat belt is always strapped on while driving.

Coming to safety, Ford has equipped the car with class leading safety features.

The Figo’s passenger cage is made from high-strength steel which offers superior protection to passengers in the event of an accident. Even the base variant of the Figo comes with driver Air-bag as standard while the top spec car gets a total of 6 Airbags (including side & curtain airbags) which is really commendable. Other features on offer are Perimeter Alarm to prevent theft, Hill launch assist, ESP and Anti-Skid Braking System with EBD. 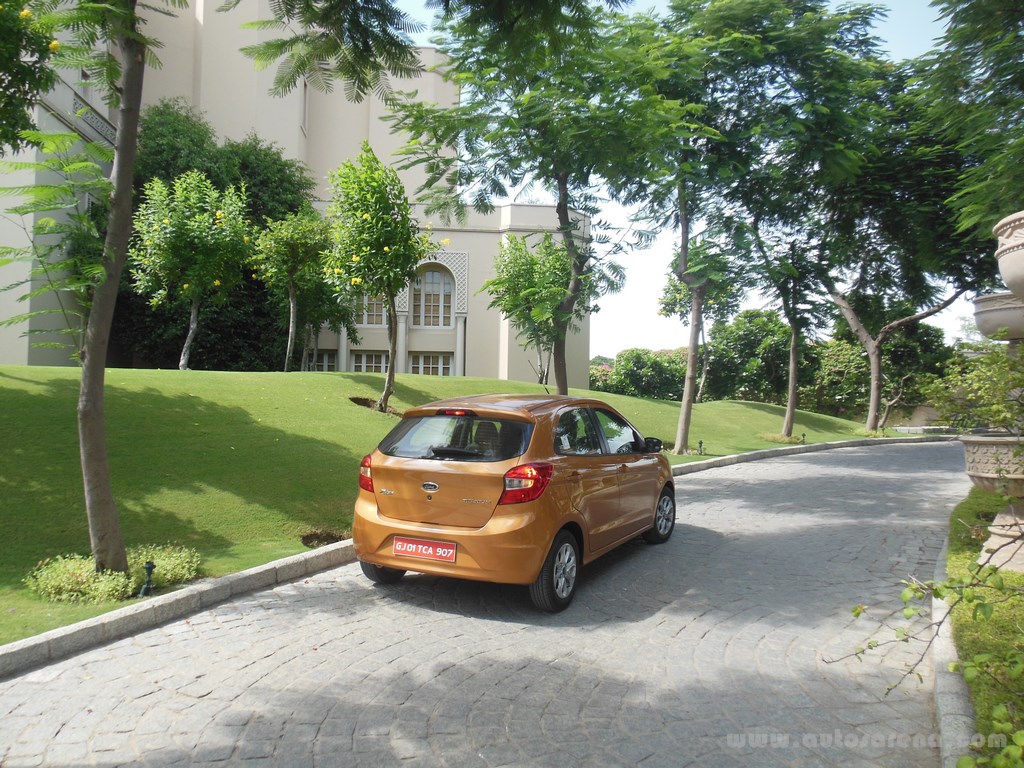 We conclude this first drive by stating that Ford clearly has a winner on its hands. The Figo has raised the bar with tech and safety features at an attractive price point making it a value for money package. The car looks good, drives well and offers decent fuel economy too and with Ford’s continuous efforts in providing better and cost efficient after-sales services, owning and driving the Figo promises to be a trouble-free experience.

Driving off-road requires knowledge, skill and confidence, which can make it intimidating for people who haven’t done it before. Even behind the wheel of a vehicle with 4×4 capabilities, it can be difficult to take […]