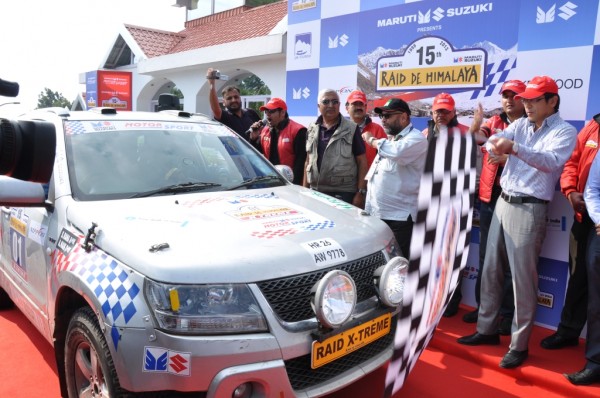 The 15th Maruti Suzuki Raid-de-Himalaya was flagged off from Shimla by Mr. T. Hashimoto, Executive Director (Marketing & Sales), Maruti Suzuki India. The Raid-de-Himalaya is considered one of the most endearing and challenging motorsport rally and ranked second after the Dakar Rally as the world’s most grueling rally races.

The 15th edition has received the highest number of entries ever, and a number of firsts to its credit. This year, as many as 153 teams are competing in this arguably one of the toughest rallies in the world. Add to the adventure and excitement an all new scooters category and a large female contingent.

There are five competitive categories at the 15th edition of Maruti Suzuki Raid-De-Himalaya. These are as follows.

Raid X-treme (4X4): This is an all-out speed category, with 39 teams from all over the country competing for the top spot. Each team comprises a driver and a navigator.

Raid X-treme (Motorcycles and Quads): This is a high-speed category. 31 bikers from India and abroad are competing in this category.

Raid X-treme (Alpine): This is a high-speed category for bikers competing for the first time in the Raid. There are 21 bikers in this category. They will compete for the first three days only.

Raid Adventure Trial: This category follows the Time-Speed-Distance format. There are 62 teams in this category. Each team comprises a driver and a navigator.

This year the rally will run again in two different routes for the X-treme and Adventure Trial categories. The rally will culminate in Leh on October 12.

The Adventure Trial rally will be flagged off from Shimla and head to Manali via Sunni, Bakrote, Kelodhar, Garhagushaini, Banjar, Kullu culminating in Manali. The second leg will start from Manali and head towards Tabo via Rohtang Pass, Gramphoo, Kunzum La, Losar ending at Kaza. The third leg is a Tabo to Tabo loop; the rally will start from Tabo and head towards Sichling, Dankhar, Sagnam, Kaza, Demul, Lidang, Poh and culminate at Tabo. The fourth leg starts next day from Tabo and head to Keylong after passing through Kaza, Kunzum La, Batal, Gramphoo and Tandi. The fifth leg will start from Keylong and head to Leh crossing Baralacha La, Sarchu, Pang, Taglang La, Upshi culiminating at Leh. The final leg too is a Leh to Leh loop. The drivers shall start from Leh and head towards Wari La, Khalsar from where the drivers will head back to Leh after crossing Khardung La pass, the highest motorable pass in the world.

For the first time, a police team is competing in The Maruti Suzuki Raid-de-Himalaya. The team is of Himachal Police. The team comprises Constable Munish Mehta and Constable Richa Sharma. The team will compete in the Raid Adventure Trial category and drive a Maruti Gypsy.

For the first time, an all-women team of the Army is competing in The Maruti Suzuki Raid-de-Himalaya. The team comprises Maj Smitha of ASC and Capt Madhavi Singh of EME. Maj Smitha and Capt Madhavi are driving a Maruti Gypsy and aiming for the top spot in Raid Adventure Trial.

For the first time, an Indian woman biker is competing in the tough Raid X-treme (Motorcycles and Quads) category. The competitor is Ms Sheetal Bidaye of Mumbai.

Maruti Suzuki has been launching a slew of products this festive season. Maruti introduced the S-Cross, Ciaz SHVS hybrid a month back, recently introduced the refreshed Ertiga and a number of limited editions. The company […]

Maruti Suzuki will start the New Year by launching the all new Celerio hatchback at the Auto Expo. The new hatch will replace the A-Star (ALTO) and the Estilo in India. A couple of days […]